New Around Here? Check out Our Preview Campground which is open to guests. Register now for full access! 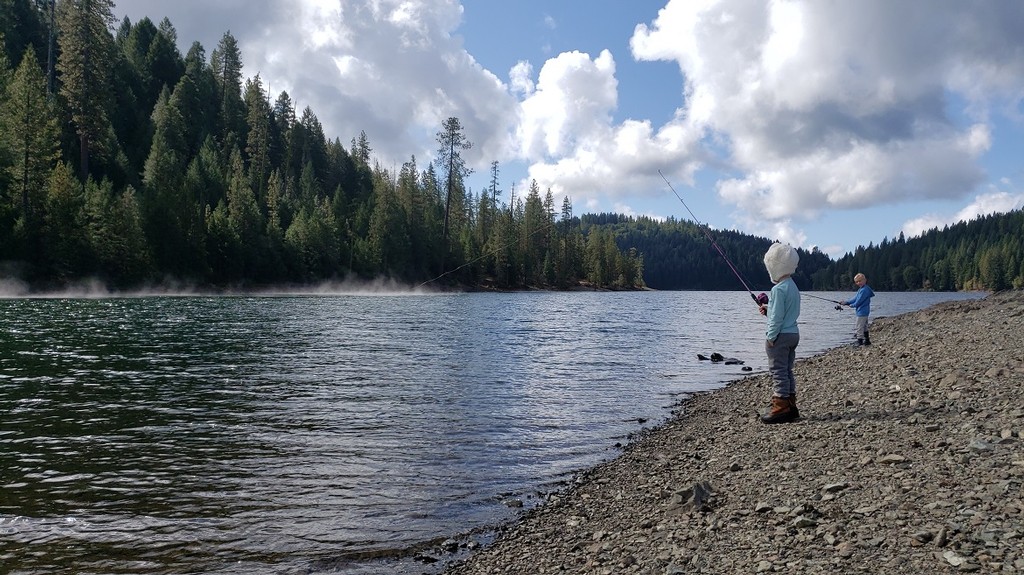 Chris walked up to me after dropping his son off at class and blurted out, "Hey"  When are we going to do that camping trip?"

It was one of those questions people ask in passing because they know you do that kind of stuff - you camp.  But Chris is a sincere person who doesn't say many superficial things.  Plus, his son and my son were close friends at school.

So instead of blowing him off by saying "Someday soon would be great!  Send me some dates that work for you and we'll figure it out," I said, "Let's look at our calendars right now and pick a date."

After some serious calendar gymnastics, we identified the last Saturday in September (after the boys played their soccer game) as the only date that would fit everyone's schedule.  We locked it in: two days and one night of camping with the kids.

My brain immediately went into overdrive.  Where should we go?  What if the location I picked didn't meet the high standards of our new camping friends?  Did they like water sports?  Did they like hiking?  Did they expect a beach-front view?  This was my first shot and I had to find a campground that hit it out of the park for EVERYONE.  (That's what my brain told me, at least.)  The reality was that the boys just wanted to sleep outside for the night, explore, and play in some dirt.  All we needed was somewhere fairly close with a lake or river.

You'd probably imagine that I'd have a long AND a short list ready, considering the hundreds of campgrounds Ryan and I have been to.  But the honest truth was that I was overwhelmed with the possibilities of where our adventure could bring us.  I happened to send out a newsletter to the Campgrounds 360 community that day with a soft plea for help.   Fortunately, my friend Mike responded and suggested Sugar Pine Reservoir.  I had been up there about a year prior with Ryan and the kids, but all I really knew was that it was 90 minutes outside of Sacramento and the camp host, Cowboy, kept his campgrounds meticulous.

When booking a campground or looking at a new location to go camping, the first step is to check out the Campgrounds 360 website.  You might think that this is a shameless plug, but, to be honest, Ryan and I created this website because we wanted campers to feel confident when picking their next campground and site.  I'm no different than y'all; I wanted to feel confident that we would have a bitchin' time.  So, yes, my first stop was Campgrounds 360. 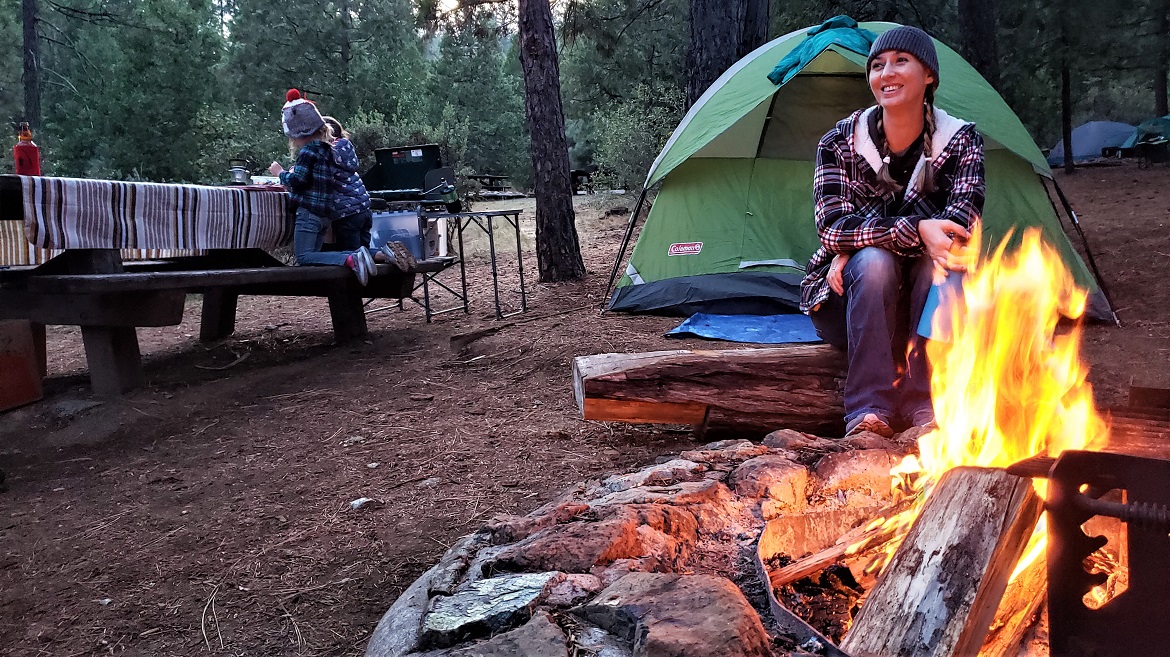 What the perfect camping trip is supposed to look like

From the 360° images, I saw that all of the sites at Shirttail and Giant Gap (the two campgrounds at Sugar Pine) were well-shaded and large enough for one or even two tents.  The pine trees and size of each site offered a decent amount of privacy.  Plus, there was the Sugar Pine Reservoir right there for some hiking and fishing.  This looked great!

As the weeks edged closer to our camping date, our little group of 2 adults and 3 kids grew to 6 adults and 6 kids!  I looked at the campground reservation system and found that the campground was filling up quickly.  (We found out later that it was the first weekend of hunting season.)  In a panic, I looked back at the sites that were still available.  Sites 8,9 and 12 at the Shirttail campground were the only ones left.  My heart sank.  My gut told me these sites wouldn't be close together, marking my failure to plan the perfect camping trip.  But when I looked at the map on Campgrounds 360, I saw that these sites were all clustered together.  It was absolutely perfect!  With just a week to go, we booked the sites.

On Friday night, the weather forecast indicated a slight chance of rain on Saturday morning and maybe a little more rain that night while we slept.  It was over 100 degrees in Sacramento that week so I wasn't too worried; I figured it would be a warm tropical rain if it actually materialized.

Saturday morning, each family packed their car, played their soccer game, and headed up the hill toward Forest Hill My drive with Nolan and Nyah (Wyatt stayed with his Grammie and Papa) was beautiful.  After crossing the Forest Hill Bridge, I saw steam rising up from the road.  The storm that came through a half an hour earlier must have been cold, I figured, causing steam when it hit the hot asphalt.  "Hmm, I guess my assumption about the tropical storm was wrong," I thought to myself.  On the positive side, if the early morning system came through later than expected, surely the evening storm would come through later as well.  'It looks like we're going to miss both ends of the storm, kids!" I confidently exclaimed.

The afternoon was ideal.  Each family set up camp and then set off for a small hike down to the lake.  The kids were having a blast!  Mike made the most delicious tacos for dinner, and Annie complimented them with homemade salsa that could knock your socks (and pants) off.  The group of five families knew relatively little about each other yet synchronized more and more with each passing moment.  As dusk turned to dark, kids and parents hovered over the warmth of the fire, making s'mores and reflecting on how perfect this semi-random group of families was for each other. 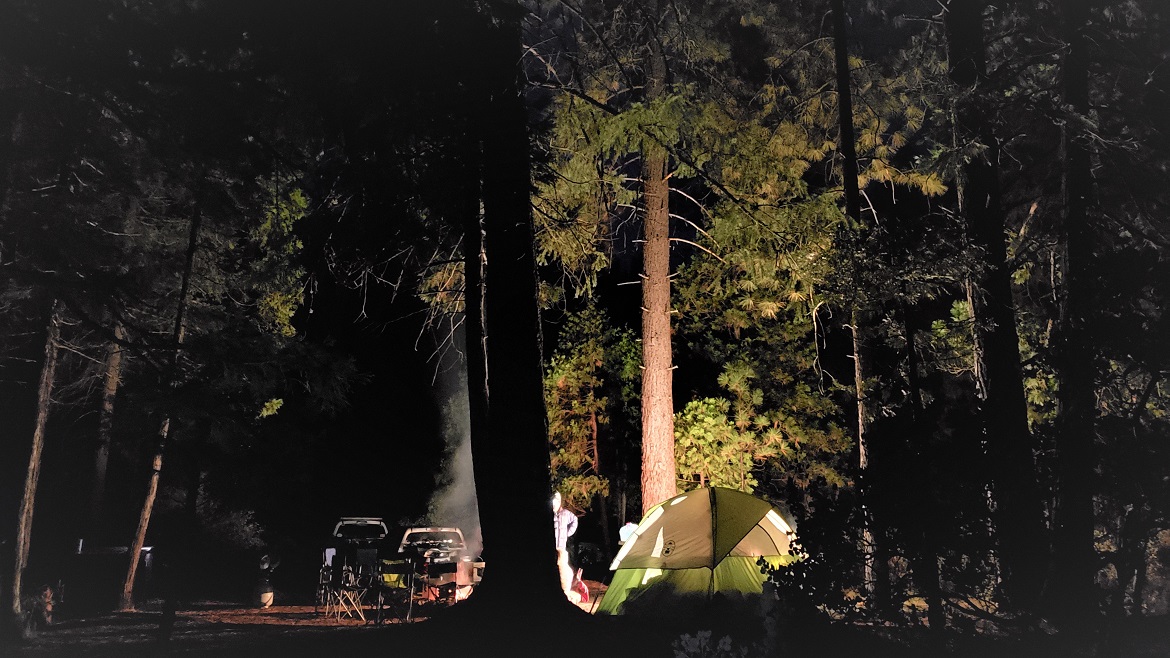 In the middle of this serendipitous moment, we heard the sound that would change everything for the next four hours.  Raging thunder clapped in the distance; a strong blast of chilled wind knocked condiments from the picnic table.  We could hear the rain coming quickly towards our camp.  Our eyes each connected over the fire and we knew the serenity of the moment was over.

The rain turned into heavy pellets of hail as the lightning moved towards our camp.  The kids all had the look of terror in their eyes.  The flash of lightning and crash of thunder were quickly on top of us - there was no need to count Mississippi's to figure out how far away the storm was.  We shuffled the kids into the popup tent (thank you, Mike) to calm down and dry off while we hastily shoved the dirty dishes and gear into bear boxes.  Chaos reigned.

I looked up for a moment to the funniest scene - amidst the scurry of the adults and tears from the children, my daughter sat peacefully in her friends' tent, calmly taking itty bitty bites of her s'more.  She was mesmerized in the delight of this delicious treat and paid absolutely no attention to the events unfolding outside.

Despite the misleading weather forecast, we all made it through the night with decent sleep.  The following morning, we got right back to our adventures.  The kids loved fishing down at the lake (although there was nothing but rocks and weeds being reeled in).  They were in heaven shooting the salt gun (even though there were no flies to shoot at due to the cold).  They even enjoyed getting into the back of James' truck to sit on the quad (despite it never making it out of the truck bed that weekend).

Just as everything seemed back on track, I heard Nyah's unmistakable wail.  This is the girl that wasn't fazed by bolts of lightning striking yards away from her, so I knew something was wrong.  Thankfully Chris was medically well-versed and said that Nyah was likely just experiencing gas.  As a survivor of an appendicitis I couldn't be too caution - I needed to get her to the hospital.

Within five minutes we had most of my gear back in my car.  Nolan was still having too much fun, so I left him behind to enjoy more time with his friends.  I carried my screaming daughter into the car and set off for the longest drive ever.  The hospital was an hour away and her wail didn't let up the entire drive.  Long story short?  She was constipated.  The doctor gave me some Tylenol for my headache.

Camping with kids creates magical memories.  It's never easy but every stressed and back-breaking moment is worth it.  Here's how I know:  Monday morning when I dropped Nolan off to school, his friend Sophia (the camper who was most frightened by the lightning and hail) looked over at us and exclaimed, "Nolan!  That was the best weekend ever, wasn't it?  We had so much fun out there!"

When you hear a kid recall a trip like this using words like those, you know you've got to do it again.  I strongly believe this was the first of many trips for this pack of families.